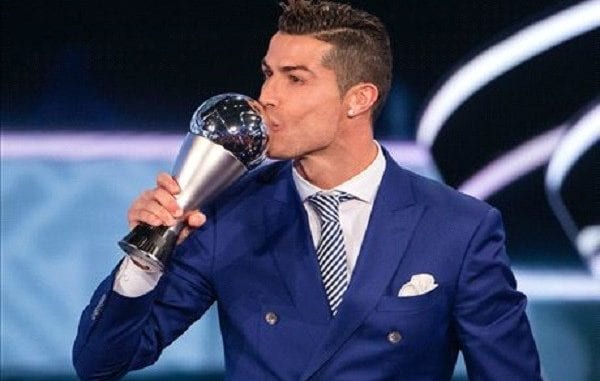 Ronaldo also won the ballond’or in December, with both honours recognition for success in the Champions League with Real and Euro 2016 with Portugal.

He beat out Messi and Atletico Madrid’s Antoine Griezmann. Ronaldo took home 34.54 percent of the votes, while Messi had 26.42 and Greizmann had 7.53.

“It was my best year so far,” said Ronaldo. “The trophy for Portugal was amazing. I was so happy and of course I cannot forget the Champions League and the Club World Cup. We ended the year in the best way. I’m so glad to win a lot of trophies, collective and individual. I’m so, so proud.”

He also decided to take a shot at Messi and Barcelona’s players for not attending the ceremony.

This win isn’t a surprise at all. Ronaldo was the heavy favorite entering, and Messi’s absence pretty much confirmed he would win.