A recent photo of Jet Li was widely shared on social media and sparked concern among fans who felt the martial arts legend looked unrecognisable as he continues to battle health problems.

Li, who has appeared in films including Romeo Must Die (2000), Lethal Weapon 4(1998) and The Expendables series, was photographed visiting a temple in Tibet donning glasses and a shaved head. The 55-year-old appeared to need assistance while walking.

Li revealed in 2013 he was suffering from several health issues, including hyperthyroidism, spinal problems, and a heart condition. He was first diagnosed with an overactive thyroid in 2010 and took medication to control it. 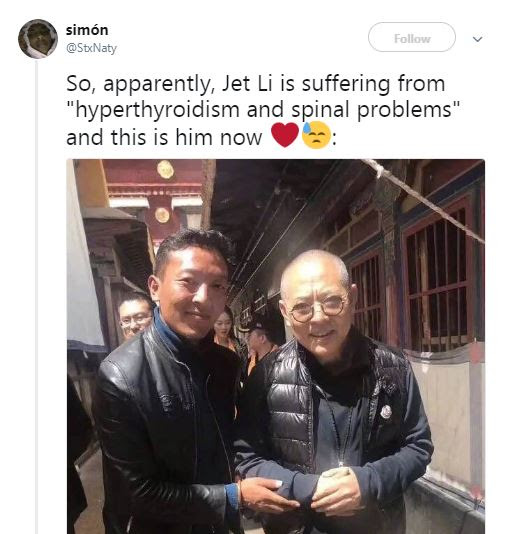 Reacting to the news at that time he said: “Either I continue making action films or spend the rest of my life in a wheelchair”

Serious injuries he previously suffered to his legs and spine also affected his movement. He said he couldn’t stand for a prolonged period of time without hunching.

Amidst these concerns, the manager of Li, Steven Chasman has come out to assure fans of his wellbeing.

He said: “We appreciate everyone’s concern. But Jet is completely fine. There’s nothing wrong with him. There’s no life-threatening illness. He’s in great shape.”

He added: “It’s one picture and people are making these interpretations from it. If you took a picture of me at the wrong angle and wrong time of the day, I could look frail as well.”