Kim Kardashian‘s $10 million February lawsuit against fast fashion retailer Missguided has come to an end. The reality star was awarded $2.7 million in damages in a default judgment filed on Tuesday in a federal district court in Calif.

“Defendant Misguided USA Finance Inc. has failed to appear, plead, or otherwise defend in this action, and default was entered on March 29, 2019,” court documents obtained by E! News read.

The documents further declared, “Pursuant to the Court’s Order Granting in Part Plaintiffs’ Motion for Default Judgment, judgment is hereby entered in favor of Plaintiffs and against Misguided USA in the amount of $2,700,000.00 in damages and $59,600.00 in attorneys’ fees. Furthermore, Misguided USA is hereby permanently enjoined from using Plaintiffs’ trademarks in connection with the sale, marketing or distribution of its products.”

Kim Kardashian is fed up with fast-fashion brands stealing original designs from “true designers.” The KKW Beauty mogul took to Twitter to air out her frustrations with certain Instagram-type brands, saying, “It’s devastating to see these fashion companies rip off designs that have taken the blood, sweat and tears of true designers who have put their all into their own original ideas.”

She added, “I’ve watched these companies profit off my husband’s work for years and now that it’s also affecting designers who have been so generous to give me access to their beautiful works, I can no longer sit silent.” While Kim didn’t name the fashion brands on social media, she has, however, filed a $10 million lawsuit against Missguided for using her trademarked name and likeness to promote its product online.

In addition, the suit also claims that Missguided has used Kim’s likeness for their “marketing and sales strategy” without the TV personality’s consent. “Like other ‘fast fashion’ companies, Missguided, which sells clothing throughout the world on its website (among others), has become notorious for ‘knocking off’ the clothing worn by celebrities like Kardashian.”

The lawsuit also states, “Missguided does not merely replicate the looks of these celebrities as seen on red carpets, in paparazzi photos, and in social media posts. Missguided systematically uses the names and images of Kardashian and other celebrities to advertise and spark interest in its website and clothing.”

Missguided issued the following statement to E! News. “We haven’t received any notification of legal action, but in any event any action based on online banter would be meritless,” the statement read. “Missguided shoppers know the score—We’re about the celeb look, for people without their bucks. For the record, as much as we love her style, we’re not working with Kim on anything.” 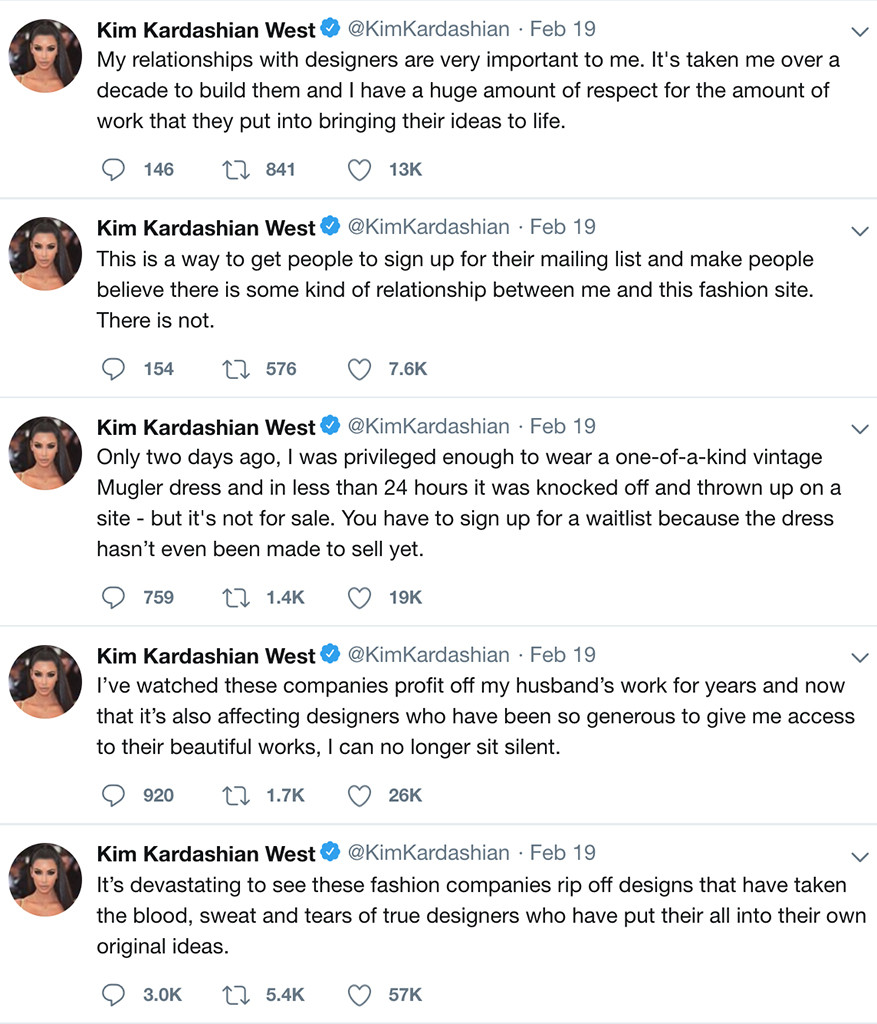 Kim shared an example of how these fast-fashion brands replicate her outfits, writing:

“Only two days ago, I was privileged enough to wear a one-of-a-kind vintage Mugler dress and in less than 24 hours it was knocked off and thrown up on a site – but it’s not for sale. You have to sign up for a waitlist because the dress hasn’t even been made to sell yet.”

Only two days ago, I was privileged enough to wear a one-of-a-kind vintage Mugler dress and in less than 24 hours it was knocked off and thrown up on a site – but it's not for sale. You have to sign up for a waitlist because the dress hasn’t even been made to sell yet.

In fact, Kim pointed out this issue in early February on Instagram. She posed in an unreleased gold dress her husband Kanye West made for her last summer. “P.S. fast fashion brands, can you please wait until I wear this in real life before you knock it off,” she captioned her post.

Going through old fitting pics & found this gold look that Kanye made for me for my Miami trip last summer (I went w the neon vibes instead) P.S. fast fashion brands, can you please wait until I wear this in real life before you knock it off? 😂

“Hey @KimKardashian, We Just Couldn’t Help Ourselves,” they cheekily wrote on Instagram. It’s important to note, Kim has yet to file a suit against Fashion Nova. In addition, Missguided also knocked-off the same dress. However, it appears the Kardashian outfit dupes have been deleted on the brand’s social media platforms.

Diet Prada has the receipts, though.

Hey Kim, we're onto your little game. Just when you thought nothing would top the fake-out "confession" of Kendall's Proactiv ad, the Kardashians do it again. @kimkardashian posted a picture of herself in an old dress Kanye made for her, presumably under his Yeezy label, with a pithy caption pleading for fast fashion brands to let her wear the dress before knocking it off. ⠀⠀⠀⠀⠀⠀⠀⠀⠀ ⠀⠀⠀⠀⠀⠀⠀⠀⠀ Three hours after her post, it popped up on quick-turn retailer @missguided , who has entire website sections dedicated to kopying the Kardashian style. Last year, Fashion Nova famously dropped their own versions of Kylie's custom birthday looks mere hours after she posted them. The lack of transparency around celebrity endorsements is a big problem facing social media. We think we smell a rat. Dieters, is this a thinly veiled collab, or does Missguided have a secret atelier of magical elves making stretchy dresses round the clock and shooting them on Kim K doppelgängers? Lol. ⠀⠀⠀⠀⠀⠀⠀⠀⠀ • ⠀⠀⠀⠀⠀⠀⠀⠀⠀ #kimkardashian #missguided #literally #fastfashion #collab #transparency #designer #yeezy #ye #kanye #kimye #collaboration #magicalelves #speedtomarket #retail #luxurybrand #kardashian #kuwtk #fashionnova #ootd #wiwt #dietprada