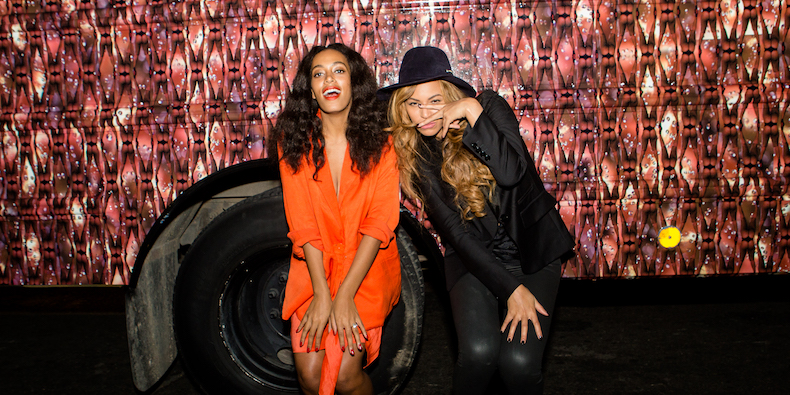 It’s only two weeks into 2017, but the Knowles (Beyonce and Solange) sisters are letting no grass grow under their feet, coming in strong with a brand new interview magazine. On Tuesday, Solange revealed that she’s the latest cover star for interview magazine . The interview was conducted by her older sister Beyoncé, who touched on everything from the meaning behind her single “Cranes in the Sky,” what it was like growing up in Houston, and the similarities between their father and Master P, who narrated A Seat at the Table.

Beyonce started, enquiring about a parent-teacher conference which Solange had attended.

Beyonce then told Solange how proud of her she was as they discussed her love for music which started a long time ago, with the little sister saying having a legendary sister was certainly inspiring.

On the subject of being such a strong black woman who joggled music production, writing her own lyrics, singing, playing instruments and all the rest of the incredible things she managed to do all at once, Solange said the one thing she had to fight against was not feeling arrogant whenever she had to say every single lyric from her new album had been written by her.

‘I remember Björk saying that she felt like, no matter what stage in her career, if a man is credited on something that she’s done, he’s going to get the credit for it. And, unfortunately, that still rings true.’

Solange went on to say, ‘It’s something I’ve learned so much about from you, getting to be in control of your own narrative. And, at this point, it should be an expectation, not something that you’re asking permission for. I feel like I’m getting closer to that, not taking on all the baggage when I have to just stand up for myself and say, ‘No, I’m uncomfortable with that.’ And I really appreciate you and mom being examples of that, being able to speak about our achievements, these things that deserve to be celebrated, without feeling bashful about it.’

Who inspired her to write, arrange, and co-produce every track on A Seat at the Table.

One of my biggest inspirations in terms of female producers is Missy. I remember seeing her when you guys worked together and being enamored with the idea that I could use myself as more than a voice and the words. On my previous records, I contributed to production here and there, but I was always really afraid to really get in there and … I guess I wasn’t really afraid, I was just really comfortable writing the songs. I felt like my contributions as a producer were enough.

But when I started to work on the sonics for this record, I realized that I had to create such a very specific sonic landscape in telling the story. I had these jam sessions, and there were holes that no one else could really fill for me. It really came out of a need for something outside of what I could articulate and lead someone else to do. And it was scary. It was really scary, and a lot of times I was frustrated with myself and feeling insecure because it was new to operate in that space and be in front of people at this age, learning something on this level. But I feel so grateful and excited that there’s a new phase that I conquered as an artist.

She also spoke about her fan love for Nas and iconic singer, Diana Ross.

SOLANGE: I’m probably on the internet way more than I should be. [both laugh] I don’t know. I love connecting people. I love introducing people to other people who are doing incredible work in the world. And I’m just on the internet too damn much. [laughs]

Our favorite bit came at the end:

BEYONCÉ: And, honestly, growing up, how did I do as a big sister?

SOLANGE: You did a kickass job. You were the most patient, loving, wonderful sister ever. In the 30 years that we’ve been together, I think we’ve only really, like, butted heads … we can count on one hand.

BEYONCÉ: I was expecting something funny, but I’ll take it. Thank you.